So The Cheesecake Factory has this special cheesecake that I'm worried they will "discontinue" like they are wont to do. So I browsed online in case I need to whip out my kitchen and make one myself. This looks like a ton of work and effort, but someday, it may all just be worth it. So here's how it's done: (thank you, Donna Diegel)


The first step  is to make the plain Cheesecake and chill it completely before assembling. Make the cheesecake batter following the directions given in the recipe. Instead of making one thick cheesecake, divide the cheesecake batter between two prepared 9 inch springform pans. Reduce the baking time, and bake the two cheesecakes for 40-45 minutes, or until the sides are set and a little puffy and the center is slightly jiggly. They will firm up during cooling. Continue to follow the directions, and chill for at least 4 hours or overnight.

4 packages (8 ounce each) cream cheese, softened
1 1/2 cup sugar
1/4 cup cornstarch
1 Tbsp vanilla
2 large eggs
2 egg whites
1/2 cup heavy cream
The second step in making The Cheesecake Factory's Red Velvet Cheesecake is making the cake layers. Mix one batch of the Red Velvet Cake batter according to directions. Spray or butter one 9 inch round cake pan, and bake at 350 degrees for 30-40 minutes, or until tooth pick comes out clean. Cool cake layer 10-15 minutes before loosening, then remove from the pan, cool completely and chill for a few hours. Carefully slice through the red velvet cake layer horizontally, making sure to cut into two evenly sized layers. Freeze cake layers for at least four hours or overnight.

Posted by craftyashley at 4:28 PM No comments: 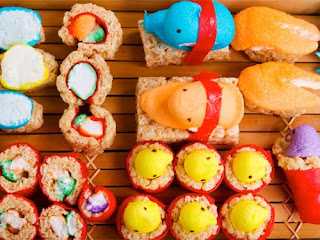 My father and I share a common bond, (well, more than just one...) and it is a deep love for all things Peeps. So when I came across this recipe I had to share.

This is anything but the standard recipe I usually post here- forgive me for being silly. But seriously- this is hilarious. And I completely intend on doing this either today... or maybe next year. Because I hate sushi- but I have a feeling I would be all for peepshi.

Side Note! I actually made these today! I could not find Fruit by the Foot- where would you even begin to look for that?! Anyway, I used Air Heads- it was a bit harder, but it worked! I also tied a bit of pull apart licorice around it. Looked super great- and certainly got more than a couple chuckles.
Posted by craftyashley at 9:59 AM No comments:

About this Recipe Blog

I'm a busy mother of twins. I have a hungry, hungry husband. I need three toddler meals a day, and 2 grown-up meals a day- seven days a week, 365 days a year! That's a lot of food! (especially since my family insists that they are fed every day) And the same 'ol things get really tedious!

I've been on a mission to find delicious recipes that don't take up a bunch of time, won't dirty up a bunch of dishes, and do not require a laundry-list of ingredients of which I will forget or misplace. So this is pretty much my recipe box.

I can't lie and act like this is all 5 star cheffery. (I'm not a snobby food person) It's just realistic family stuff.
With the invention of Pinterest, (I've had this blog since 2008, pre-Pinterest) I have been posting all the recipes I've tried and keep in rotation. Everything on here I have actually made, and would make again. I do transcribe recipes (sometimes I tweak!) only because I have bought ingredients and gone back to fix the recipe, only to find the blog or link is messed up/deleted. So I write them here for myself, giving credit to those original cooks as much as possible.